The following are the final scores for TRI-RMD’s Flux-a-Thon and “Twelve Days of Christmas” series of events:

On 104.12.17, a lifepod with transponder indicating it was for a pilot named Dari3l, docked safely at Solrain Core station.  Biometrics indicated that the occupant’s life signs were in the normal range, but medical and security teams were dispatched since the callsign Dari3ldid not correspond to TRI database records. 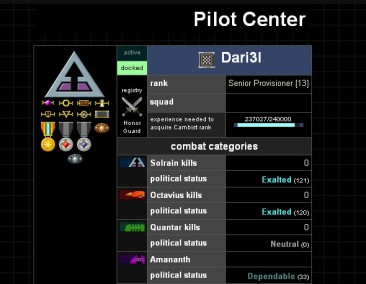 According to personal log entries obtained by Darkspace Dispatch, the pod’s occupant is alleged to be the second clone of the xenobiologist Dariel:

Awoke, for the first time ever. It’s kind of obvious what you are when you wake in a cloning vat, a rubbery pipe down your throat (which reminds me of another story form my source’s youth… at band camp), and the first breath of real air burns your lungs like fire.

Someone cloned us. I’m not sure who they cloned, be it the source or the first clone, or even why. Let alone who did the cloning. The station gave little clues – a veritable Mary Celeste. Abandoned, but in perfect condition. The computer logs were empty for the last several months, and showing only unmarked dockings and launches prior to that. A single Premia shuttle was in the docking bay, but no-one else was on the station at all, according to the computer. I found some basic engines, and fitted them to the hull, and ran the self tests. Damned if I was going to stay in this crazy place.

After an extended chase and some conflicting and puzzling computer log entries from KTRI, Septio’s ship was destroyed by Spork (Seneschal of The Brotherhood) and Septio’s pod returned to TriPoint where Quantar authorities immediately detained him for questioning.

Although there have been no official releases on the capture, sources within Quantar Security have said that Septio has been positively identified as an Octavian. They are currently determining how an Octavian was able to bypass the genetic security keys for the Typhoon fighter he was flying.

These same sources have also disclosed that Septio has also been tentatively connected with Letifer a Solrain implicated in the Sol/Quant Bribery Scandal that resulted in the death of Brother Io.

In a surprise announcement, Hrafn, former leader of the Quantar zealot group Mujahedin, was named a “ninth-level” brother of The Fourth Tribe — the purported Quantar “lost tribe” that tuned up on Hyperial. As the Ninth Brother, Hrafn will take over duties as spokesman for The Fourth Tribe and has also formed a “pilot wing” for the formerly planet-bound group.

Charlov, Eighth Brother of The Fourth Tribe, released the following statement through Fence and the UUNN:

Influenced in no small part by the Amber Fist’s predecessor organization, the Hyperial government declined to join The Reconstruction Initiative in 40AT. Therefore, Hyperial has no space force, and we of the Fourth Tribe have been forced to rely on the assistance of pro-Quantar groups such as JITW, BH, and DDZ in the past. We wish to continue good relations with Quantar squads, however, we would also like a presence and a voice in space of our own.

To this end, pilot Hrafn of Quantar has been formally adopted into our order as a Ninth Level Brother of the Fourth Tribe of Quantar. His newly formed TRI squad Fourth Tribe is fully endorsed and authorized. Likewise, any pilots he sees fit to recruit will be granted a position in the Tenth Level regardless of TRI ranking or internal squad rankings Brother Hrafn sees fit to organize.

My roll in the public eye will hereafter diminish. Hrafn’s voice, infused with the fire of Orus the Lion, now carries the full authority of the Fourth Tribe to TRI pilots as our duly appointed representative. May Hamalzah smile brightly upon you, Brother Hrafn, and upon those who will follow in your wake. Reunification of our people is a most worthy goal; may these be the first steps in toward that end.

Hrafn immediately called for “reunification” of The Fourth Tribe with Quantar and began alliance negotiations with other Quantar groups.

The group of which Hrafn is the official spokesperson, calling themselves the Fourth Tribe of Quantar claim to be descended (ideologically at least) from original the Quantar that colonized Hyperial. They stayed loyal to Hamalzah when the majority of Hyperial rebelled.

TRI RMD announced the scheduling of a series of events which they have called “The Twelve Days of Christmas” — allegedly named after some obscure song discovered on a rusty DSS in The Fields.  The “Twelve Days” lineup actually began on 104.12.1 with a 12-day “flux-a-thon” event.  Other events include the following:

(NOTE:   all events are held in real-space except where otherwise indicated.)

Pilots are encouraged to take advantage of the opportunity to kick-back and have some fun during the year-end holidays celebrated by all factions.  Join your friends (and enemies) in one —  or MORE — of these entertaining competitions!

Reports have been received that Pilot Draiocht ran across a sentient Krakken-class conflux while on patrol in conflux space. flux.jpg (3131 bytes) Although he was caught completely by surprise when the sent ship chased him through a gate, he was able to destroy the conflux and did confirm that he received a sentient “kill confirmation” from TRI.

Although running across flux in flux space is not typically considered “news,” this is the first reported sighting of a sentient in that territory. There is an unconfirmed report that TRI has requested biometric logs on pilot Draiocht for 104.11.24 to confirm his sobriety.

Shortly before the completion of the Hyperial faction mission to build a Customer Producer for the new “Jammer” ECM, between 10 and 20 prototypes were reported to be unaccounted for by Lexxor.

Lexxor’s new “Jammer” ECM is popularly described as the first true electronic antimissile countermeasure available. Rather than actively destroying an incoming missile, the Jammer disrupts the missile’s tracking systems, resulting in a failure to strike the Jammer-equipped target in nine of ten combat trials.

Lexxor Intelligence employs over 230,000 people in three Quantar stations, three Solrain stations and Hyperial . Its primary source of income is in missile systems, the best-seller being the Cutlass. Lexxor also has a big stake in various entertainment operations, as well as luxury vehicle development.

Mystery and controversy surrounds a recent escape of a Quantar pilot known only as “Courier” who had been detained in Tripoint station. Another pilot, Septio was suspected of aiding the escape and Quantar authorities are looking to question him.

On the evening of 104.11.16, Courier escaped from a secure detention area on TriPoint. The escape was allegedly aided by the Septio and was further facilitated by the fact that nearby beacons had not been properly maintained and were not online with Quantar central computers.

After the escape was made public, The Brotherhood announced that it was establishing a “detection network:”

“In response to the threat presented by the recent escape of the pilot code-named “Courier” from a TriPoint detention facility, The Brotherhood will immediately begin establishing a broad detection net to capture this fugitive. The net will also be tuned to detect pilot Septio, who is wanted for questioning in relation to the escape.”

According to Quantar authorities, Courier was being held for allegedly hacking into the market pricing system. There has been no background provided on Septio, although his name suggests he is of Octavian descent. Both pilots are listed in the TRI database as “Classified,” adding further to the confusion and mystery.

Just days after Queliar Neamru II announced that both of the fugitives had apparently escaped from Quantar space, Brotherhood Seneschal Spork tracked Septio, who was flying a Typhoon, from The Gurge all the way down to Hyperial station where he apparently destroyed Septio’s ship . . .

“It does not surprise me a bit that Hyperial is involved with this,” said The Brotherhood’s leader Ambrosius. “If something nefarious is going on, the path usually leads there.”

As yet, there has been no report of any sightings of Courier.

From the TRINN Archives

Hyperial (TRI-FP) – Sources at Lexxor Intelligence have revealed that earlier this week a number of prototype ECM devices went missing from Lexxor’s main facility near Barnard. Lexxor currently has a distribution agreement with TRI pending the completion of an orbital Custom Producer in Hyperial space. Construction of this factory has been delayed so far due to an unresponsive TRI pilot cadre, despite what TRI calls “adequate financial incentives.”

“It’s certainly possible there was a profit motive here,” admitted Mnr Ozajar, a Lexxor corporate spokeswoman. “Due to TRI’s lackluster support of the construction effort, some elements in the spacefaring community may be willing to pay a substantial price on the black market for the capabilities of this equipment.”

Lexxor’s new “Jammer” ECM is popularly described as the first true electronic antimissile countermeasure available. Rather than actively destroying an incoming missile, the Jammer disrupts the missile’s tracking systems, resulting in a failure to strike the Jammer-equipped target in nine of ten combat trials. Although Lexxor was unwilling to provide an exact figure, indications are that between ten and twenty working prototypes can no longer be accounted for.

From the TRINN Archives

TriPoint Station (TRI-FP) – Local authorities at TriPoint station have announced that they believe that Courier, and accomplice Septio have completely left Quantar space, despite concerted efforts by pilots to track them.

“It is unfortunate that Courier has made a clean escape,” remarked Queliar Neamru II, Governor of TriPoint station. “However, in light of the recent security breach, security procedures are being reviewed, with the aim of identifying the failure, and preventing a similar incident in the future. Additionally, I would like to personally thank all those pilots who have provided the active detection network over the past several days.”

Check Out These Other Sites